March 31st, 1949 RCA Victor introduces the 45 rpm single record, which had been in development since 1940. For this reason, major labels in the United States ceased manufacturing of 78s for popular and classical releases in 1958 with the minor labels following suit, with the final US-made 78 being produced in 1960.Canada and the UK continued production into 1960, while India, the Philippines, and South Africa produced 78s until 1965, with the last holdout, Argentina, continuing until 1970. 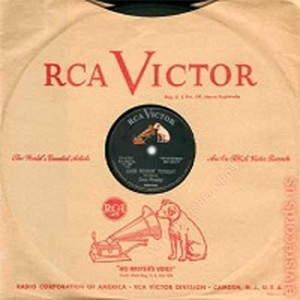 A phonograph record (also known as a gramophone record, especially in British English, or record) is an analog sound storage medium in the form of a flat disc with an inscribed, modulated spiral groove. Soundz pretty dull eh? The groove usually starts near the periphery and ends near the center of the disc. At first, the discs were commonly made from shellac; starting in the 1950s polyvinyl chloride became common. In recent decades, records have sometimes been called vinyl records, or simply vinyl.

The phonautograph, patented by Léon Scott in 1857, used a vibrating diaphragm and stylus to graphically record sound waves as tracings on sheets of paper, purely for visual analysis and without any intent of playing them back. In the 2000s, these tracings were first scanned by audio engineers and digitally converted into audible sound. 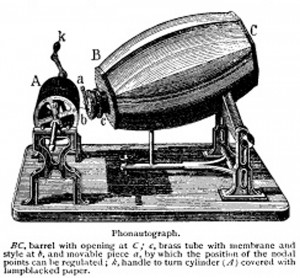 Phonautograms of singing and speech made by Scott in 1860 were played back as sound for the first time in 2008. Along with a tuning fork tone and unintelligible snippets recorded as early as 1857, these are the earliest known recordings of sound. 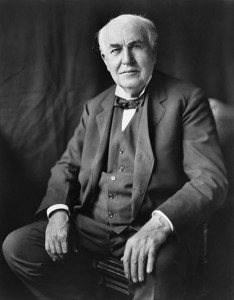 In 1877, Thomas Edison invented the phonograph. Unlike the phonautograph, it could both record and reproduce sound. 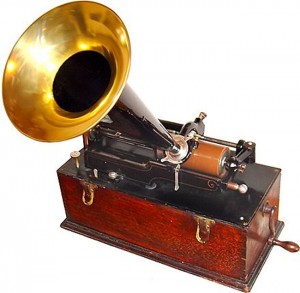 Despite the similarity of name, there is no documentary evidence that Edison’s phonograph was based on Scott’s phonautograph. 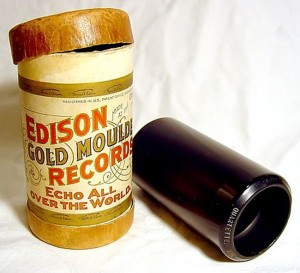 In 1901, 10-inch disc records were introduced, followed in 1903 by 12-inch records. These could play for more than three and four minutes, respectively, whereas contemporary cylinders could only play for about two minutes. 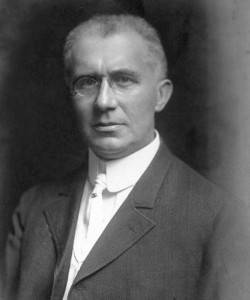 Early disc recordings were produced in a variety of speeds ranging from 60 to 130 rpm, and a variety of sizes. As early as 1894, Emile Berliner’s United States Gramophone Company was selling single-sided 7-inch discs with an advertised standard speed of “about 70 rpm”. 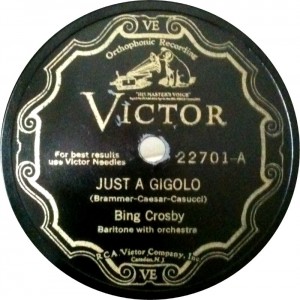 By 1925, the speed of the record was becoming standardized at a nominal value of 78 rpm. All available literature does not disclose why 78 rpm was chosen for the phonograph industry, apparently this just happened to be the speed created by one of the early machines and, for no other reason continued to be used. Above, Bing Crosby’s FIRST hit record “Just A Gigolo” from 1931. 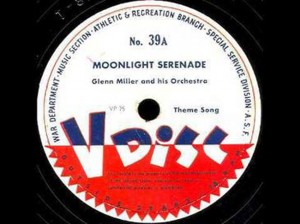 In 1931, RCA Victor launched the first commercially available vinyl long playing record, Vinyl’s lower surface noise level than shellac was not forgotten, nor was its durability. Columbia Records, a chief rival, was also working on a 10 inch long playing record. The Great Depression and WWII would slow down progress of formats. Above a “V” disc, “V” for “Victory”. These were made to boost morale of allied soldiers during WWII. 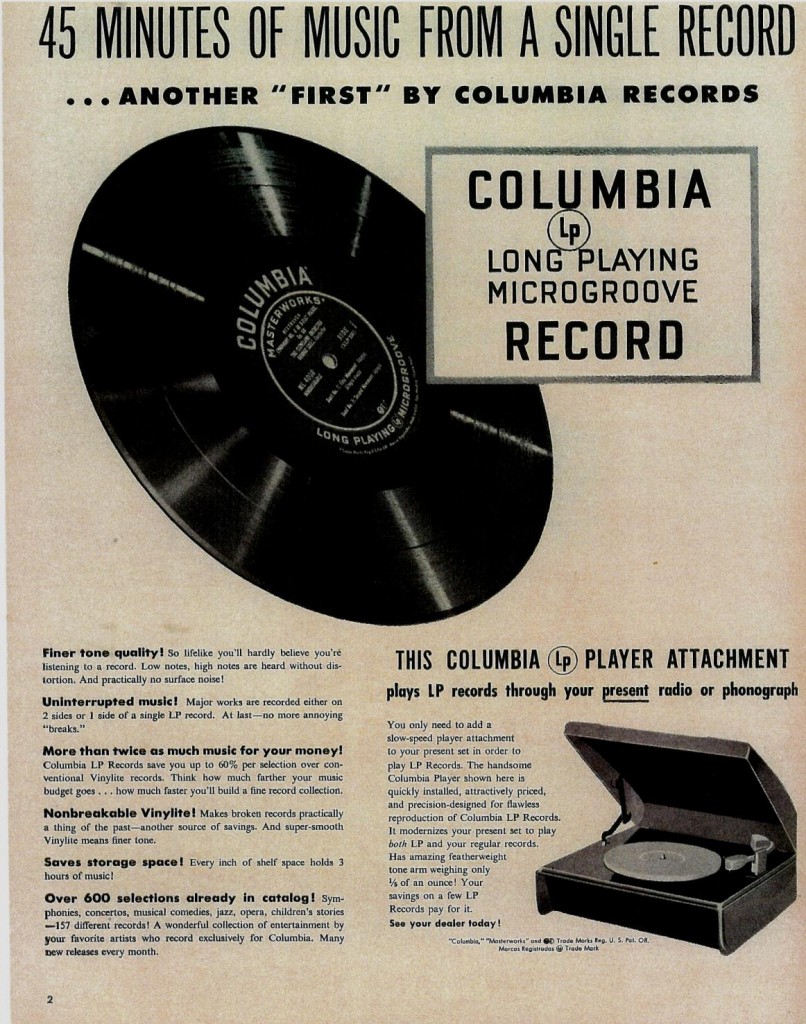 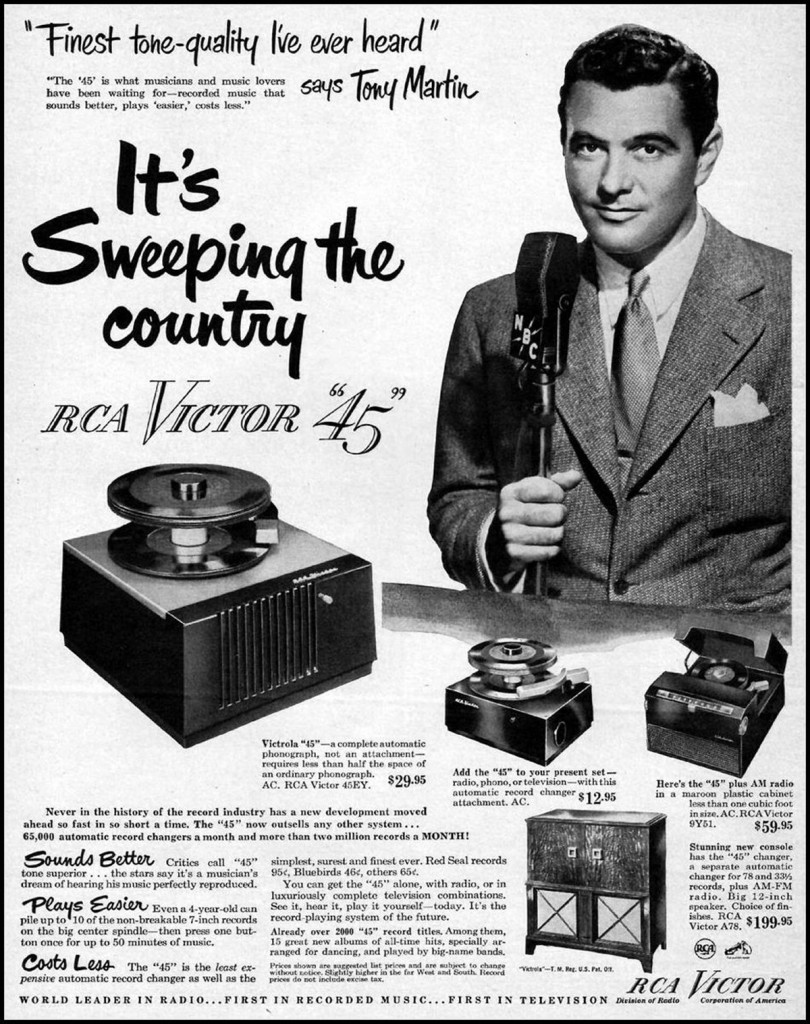 Unwilling to accept and license Columbia’s system, in February 1949, RCA Victor released the first 45 rpm single, 7 inches in diameter with a large center hole. The 45 rpm player included a changing mechanism that allowed multiple disks to be stacked, much as a conventional changer handled 78s. This format eventually took over as the standard of the industry replacing the 78 which was the standard from about 1925 until this point. 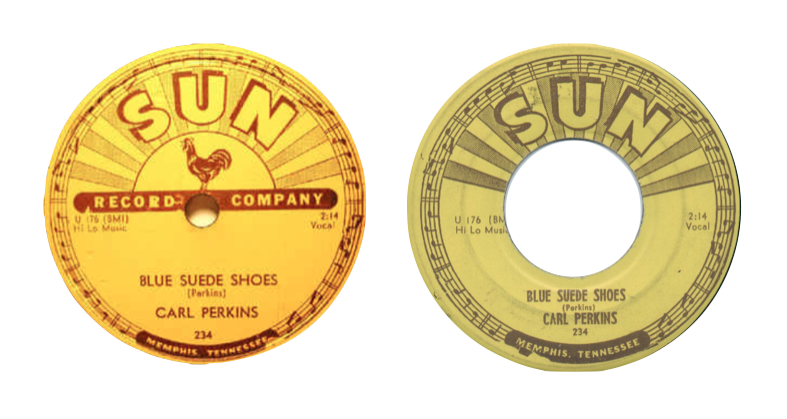 From approximately 1949 to 1958, singles would be released on both 78 R.P.M. and 45 R.P.M. formats. However with the advent of Rock ‘n Roll, disposable income of the early post war teenagers, the 45 being lighter, more sturdy, having better sound, the 45 became the standard of the industry for single releases until well into the 1990’s.