Rock Around The Clock

May 20th, 1954 Bill Haley And His Comets “Rock Around the Clock” was released. 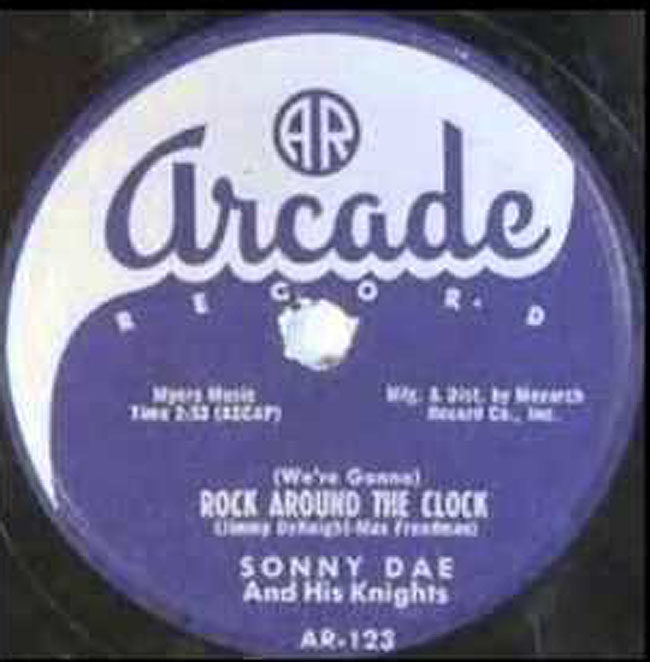 Although it was first recorded by Italian-American band Sonny Dae and His Knights on March 20, 1954, Myers claimed the song had been written specifically for Haley but, for various reasons, Haley was unable to record it himself until April 12, 1954. 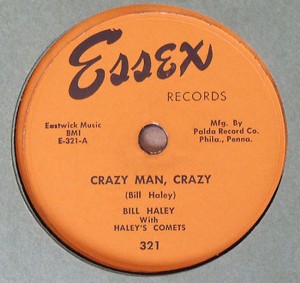 According to the Haley biographies Bill Haley by John Swenson and “Rock Around the Clock” by Dawson, the song was offered to Haley by Jimmy Myers in the wake of his first national success “Crazy Man, Crazy” which went to No. 12 on Billboard’s charts in May 1953. 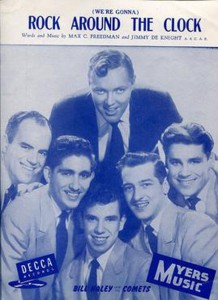 After being copyrighted with the U.S. Library of Congress on March 31, Haley and his Comets began performing the song on stage (Comets bass player Marshall Lytle and drummer Dick Richards say the first performances were in Wildwood, New Jersey at Phil and Eddie’s Surf Club), but Dave Miller, his producer, refused to allow Haley to record it for his Essex Records label (Swenson suggests a feud existed between Myers and Miller). 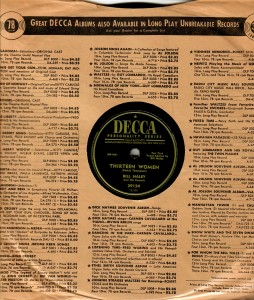 After leaving Essex Records in the spring of 1954, Bill Haley signed with Decca Records, and the band’s first recording session was set for April 12, 1954 at the Pythian Temple studios in New York City.The recording session almost failed to take place because the band was traveling on a ferry that got stuck on a sandbar en route to New York from Philadelphia. Once at the studio, producer Milt Gabler (uncle of actor Billy Crystal, who had produced Louis Jordan as well as Billie Holiday), insisted the band work on a song entitled “Thirteen Women (and Only One Man in Town)”. Above, from my personal collection, is the 1954 release. 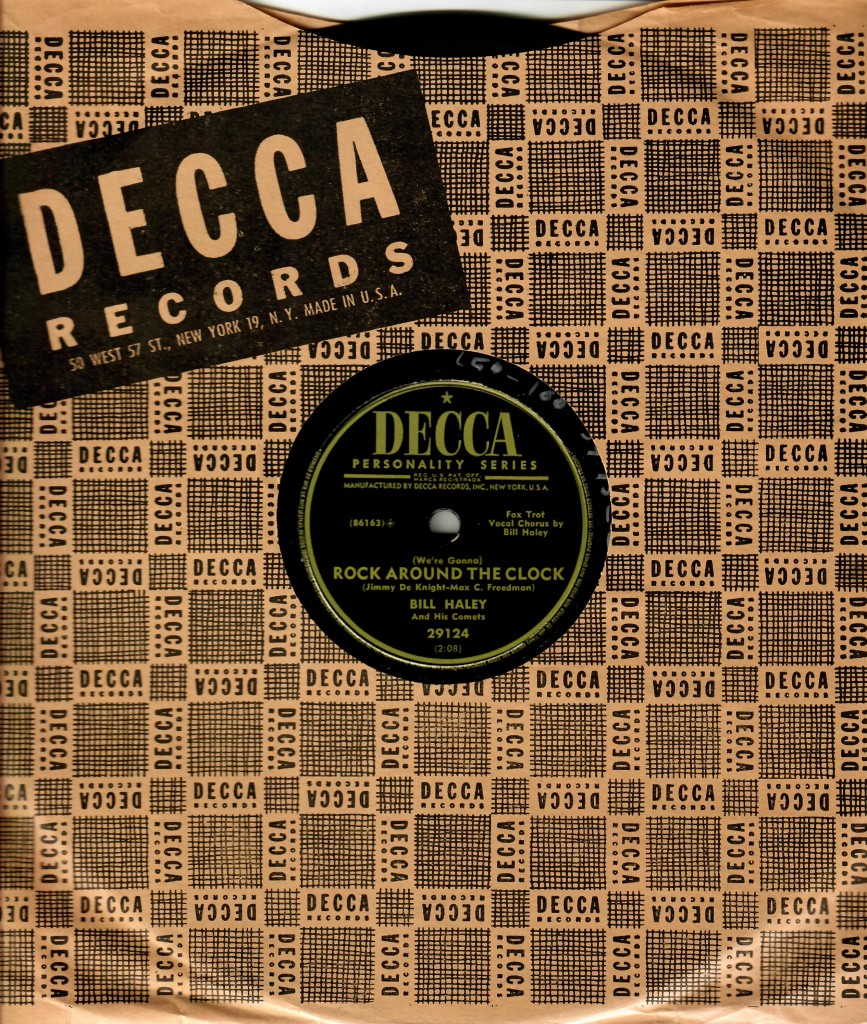 Near the end of the session, the band finally recorded a take of “Rock Around the Clock”. I’ve done shows with the original Comets with Marshall, Johnny, & Dick all confirming that most of the recording session was spent on “Thirteen Women” with “Rock Around the Clock” being recorded twice in the last ten minutes of the session. Note that the label is black with gold writing on it. This is the side that charted and, while the song did make the American Billboard music charts (No. 23 May 1954), contrary to popular opinion that it was a flop, it was considered a commercial disappointment. 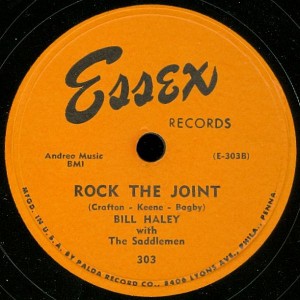 The fantastic guitar solo was done by Danny Cerdrone and is a note for note reproduction, i.e. the exact same guitar solo, that he did for the song “Rock This Joint’ when Bill & the boys were on Essex records. Sadly on June 17, ten days after this session, for Decca, Cedrone died of a broken neck after falling down a staircase (some sources say he died of a heart attack). His place as session musician in the Comets was taken by Franny Beecher, who would later graduate to full Comets member. 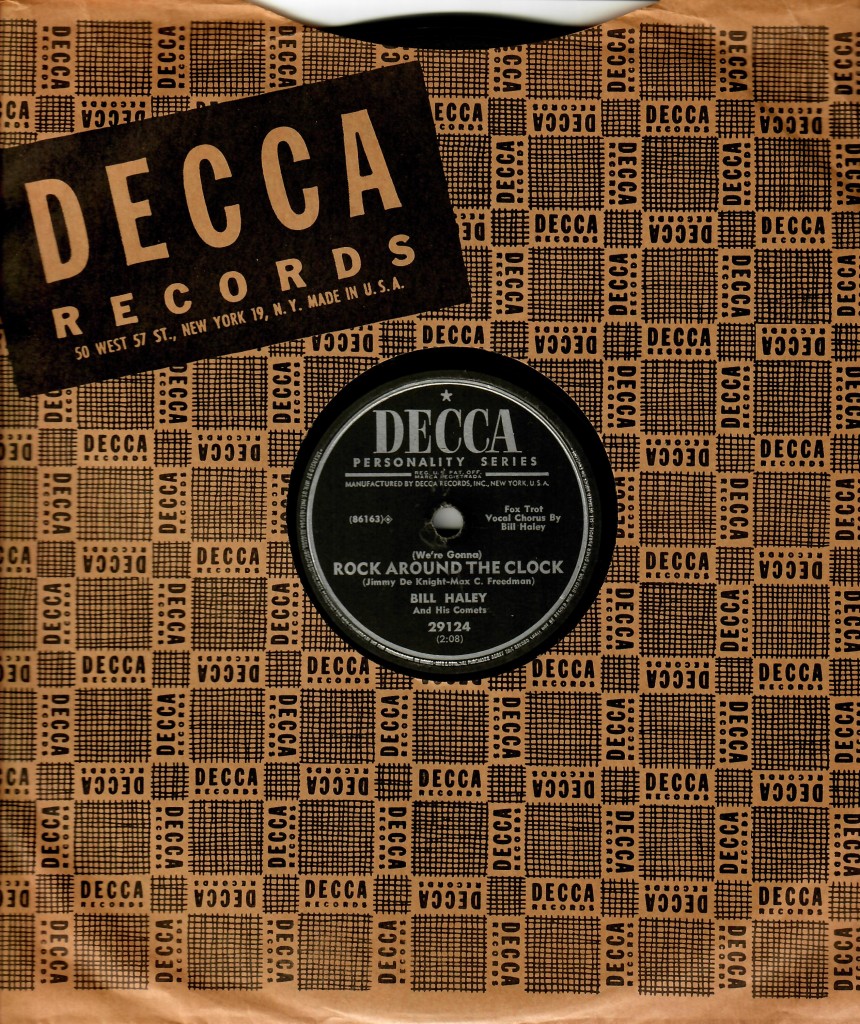 It was not until 1955, when “Rock Around the Clock” was used under the opening credits of the film “Blackboard Jungle”, that the song truly took off. Above the 1955 version of the record, also from my personal collection, with a gray label and silver writing. It went to No. 1 on Billboard for eight (8) weeks. At that time, it held the record for a single with the longest run of consecutive weeks at No. 1. 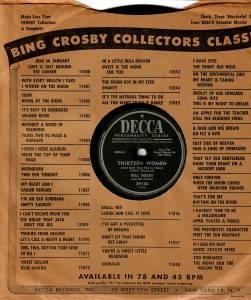 Also from my collection here is the “B” side of the 1955 release. 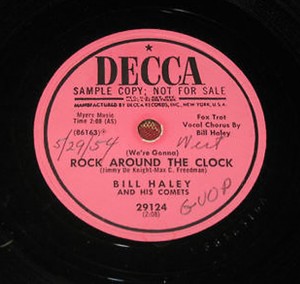 Both sides of the 45 R.P.M. version. In 2018, it was selected for preservation in the National Recording Registry by the Library of Congress as being “culturally, historically, or artistically significan”.