I want all clients to know what they are getting for their dollar which is why this press kit is being assembled and is a work in progress to be updated regularly. 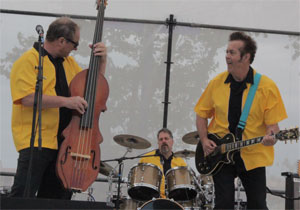 The band specializes in Rock ‘n Roll music from the late 1950’s to the early 1980’s with both original music, written by Dave, and authentic recreations of “Cover” tunes from that era.

For upcoming performances, check out the Live Shows page.

Remember, songs in the late 1950’s had musician’s playing through little 10 watt amps, it was almost acoustic anyway. To recreate a “Rocking” sound on acoustic guitars, bass and a single drum is a reality and an option for clients. It works just as well as a duo with just my Bass player, here’s an example of just that playing my song, “Dancin’ Shoes”.

If you are a future client that is a bar, nightclub or restaurant here are some of the benefits to hiring Dave and his band.

Here’s what folks are saying about Dave and the band in the newspapers and magazines.

Want to see Dave and the band live? Here are some videos fans have made of the band performing.

Do you need references and want to contact former clients?

A good time is had by all who hire Dave and his crew. If you need any more information don’t hesitate to contact Dave directly.